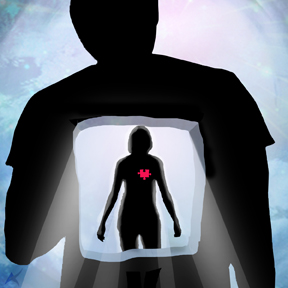 They Cannot Give What They Do Not Have

How many people have thrown their hearts against a stone in trying to get someone whom they love to love them back? With the violent, coarsened state of the world today, I would venture to guess that the number would be in the millions.

It all starts in childhood, when neglectful, emotionally stunted, narcissistic or self-involved parents bring a new life into the world. Their young, impressionable child will be trained from infancy, to mimic what their parents do or do not do. When there is emotional neglect, life may appear normal because there is nothing to compare it to, but the child might have inner stirrings and an underlying, innate sense that something very basic and necessary is missing; the true emotional presence, conscious care and awareness of their parents; parents, who in reality may be no more than emotional children themselves.

Children crave positive attention, love and encouragement. They need to know that what they feel matters, that they matter. So when a parent makes promises and continually breaks them, or has a mental illness, or addictions that usurp time and healthy attention away from interacting with their child, or they have their own emotional blind spots brought on by their own childhood experiences or emotional aberrations, the child feels a certain disappointment and may even take it personally, perhaps wondering, “What’s wrong with me? Maybe if I try harder, maybe if I’m more perfect Mommy and Daddy will stop fighting and love me.”

Dependence and naiveté can lead the child to ideas that they somehow are the source of the problem. These feelings of inadequacy begin to contort the child from inside out, and will continue to separate the child farther and farther from his true self, if nothing changes.

So in going along to get along, and conforming to their distorted environment, they morph seamlessly into someone very different from their true natural state of openness and love. This is a virtually invisible process to everyone.

But by giving up who they are, children now have learned to mimic those very same deficiencies they have been taught and absorbed like a sponge, and so on and on it goes, unless some miraculous insight happens or other positive influences intervene. Without such intervention the child may never be able to return to their original state of being.

In my case, I did not like the status quo. I always had the sense that something very important was missing. Childhood was an emotionally empty time and I felt that no one really cared that I was scared or hurt or lonely. There was no one to talk to. They were busy with their own self–interests or demands, disappointments or doling out unprovoked punishments.

Even as a young child, I quickly learned that having feelings was not something to be tolerated or explored. Snap out of it. Get over it. Oh poor you. Smile when you are hurting. Pretend. So I did as I was ordered and became an angry pretender. Fractured and disconnected from my true self.

We have become a society of pretenders. No wonder everyone is so pissed; depressed and angry from deeply buried hurts of the past. Grieving for the love and nurturance never received as children, or the punishments endured for simply being alive.

The formative years of enduring emotional neglect and lack of positive attention can result in a bleak outcome, with subsequent feelings of unworthiness and recycled self -loathing emanating from one’s deepest core. Unaddressed, these feelings could negatively impact one’s entire life and relationships. Even more bewildering is the fact that you might not have any idea why you turned out that way.

If we look at the basics, it becomes very simple. We are born. We are clean slates. We are ready to love and be loved. We are programmed to learn and grow. Our caretakers write on that slate, good or bad and there it stays until it is erased and replaced with our own truths, if we ever get that far. Sometimes the slate never gets erased and the desire to do so diminishes in time and can be forgotten as the business of living takes over.

When natural development is short circuited and we do not get the emotional sustenance we need to graduate into well-balanced adults with healthy self esteem, the outcome seems to go in several ways; Self-destruction, through various addictions to alleviate the deep, internal emotional pain; Selecting partners that mimic the dysfunction one grew up with in an attempt to subconsciously try to heal the error; Or in the extreme, the destruction of others… “I am angry and unlovable. I didn’t get it so you can’t have it and I’m taking you with me.“ Why? “Because I want to inflict as much pain as I am feeling.” Or it might even be a combination of all these things.

It’s in the news everyday; Shootings in schools, theatres, malls, concerts, churches, countries fighting, religions fighting, families fighting, political fighting. What are we fighting about? What are we dying for? The answer is emotional emptiness and lack of empathy brought on by the need for the love, emotional nurturance and the positive attention that should’ve been put into place when it counted, in childhood. It may sound naive to boil the world’s ills down to the lack of love. But have you ever heard of a truly happy, productive, positive person gunning down innocents in a church or kindergarten in cold blood?

In rare cases, there are children who are born with a predisposition toward behavioral abnormalities despite having loving, healthy parents. But that’s the rare extreme.

To our discussion, some people are simply not meant to be parents. They do not possess the prerequisites of emotional stability, patience and selflessness to pass the basic test, if there were such a test. Come to think of it, there should be.

The amount of suffering that emotionally neglected people have endured in their lifetimes would be greatly diminished if we all understood one simple fact. Emotionally absent, narcissistic parents are not capable of giving what they do not have. They do not know that it is missing. They are blind to it.

Let me repeat that. THEY CANNOT GIVE WHAT THEY DO NOT HAVE. Really think about it.

When you are at a loss of what you can do to be better, or more, or different, When you are begging for love and emotional validation or empathy from an emotionally unavailable parent, sibling, friend or spouse, understand that you might as well be speaking a foreign language; one that they do not understand. You cannot expect emotional children disguised as adults to comprehend a concept that is not even in their awareness.  It would be like being mad at a baby for crying.

A person could be the greatest communicator in the world, achieve the highest personal goals, have millions of social media followers, help scores of people and still get nothing from those whose approval means the most. And no matter how hard one tries to make it so, accolades and adoration from strangers cannot fill that void because Likes and followers are only a temporary fix. The sooner you realize that it will never be forthcoming, the sooner you can leave the need for it behind and look for your fulfillment elsewhere without guilt or anxiety or expectation. That alone is freeing.

In my case, after many failed attempts at explaining, begging for clarity, or understanding, and enduring each subsequent disappointing failure with tears and years of heartache, I almost gave up. I really should’ve stopped there. But I didn’t. I’m stubborn that way. I don’t like to give up. So I even went to the trouble of writing a book to get their attention, still to no avail. It wasn’t my lack of communication skills, rather it was their lack of ability to hear, absorb or empathize enough to ultimately understand. They simply did not have the capacity.

I wish I knew this simple fact back then, it would’ve saved me from a lot of pain and wasted effort.

Bottom Line: Don’t expect a self-involved, narcissist to have empathy. Don’t waste your time like I did. My problem is that I wanted, no, needed to know why.  I did not want to accept the unacceptable. I felt I deserved better. Every child deserves better.

It should give some modicum of comfort and peace to know that it is not you. It never was you.  You were not a mistake. You were born a clean slate, ready to love, learn and grow. You did not fail anyone. They failed you. OK…there it is. Now get to it. It takes courage to be emotionally open and loving in spite of never having received it yourself. Do what it takes to get back to the real you. Get the help you need to figure it out. Do it. Because your authentic life is calling…

The world is waiting for the love you’ve always had to give.

Alyson Kay, is a graphic artist and author of Fresh Out of Hell;Escaping the Negative Influences of Toxic Parenting